Deep in the Forest with Jointline & CASE

That move resulted in them being appointed on four lots for the civil engineering, maintenance and minor works framework for Forestry England, which will see the company engaged in a variety of forestry projects across Yorkshire, Cheshire, Staffordshire, Nottinghamshire, and Northamptonshire over the next few years.

That appointment 18 months ago marked a significant milestone for Jointline and they’ve been powering ahead ever since as a Forestry England preferred contractor, maintaining areas of outstanding natural beauty. The framework includes both planned and reactive works that cover the construction, maintenance and repairs to granular forest roads and car parks, bound and unbound roads and trails, the maintenance and cleaning of roadside ditches and the repair and maintenance of culverts.

All works are being carried out by Jointline’s own highly trained in-house forestry department, and to support staff in the delivery of the framework Jointline invested in a fleet of new vehicles and plant to allow the team to quickly and easily carry out work on the infrastructure, ensuring that the forestry is maintained and kept in good condition for local wildlife and everyone who uses it.

“Before we got the Forestry England contract we had been hiring out machines as and when we needed them,” says Simon Chambers, Jointline’s Commercial Manager for the construction and forestry sides of the business, “but we quickly realised it made more financial sense to invest in our own, so we looked around at what deals we could get from suppliers, and Warwick Ward offered what we needed. Case machines hold a good residual value, so once this contract is completed we have a choice of what to do with them.

“These are our first two new Case excavators we’ve bought, although we have hired out Case machines in the past on a long term basis, so we knew they were a reliable brand, and they haven’t disappointed; our operators love them. We hadn’t dealt with Warwick Ward before, but the support and service we have received so far has been great.”

Awesome Earthmovers caught up with the two Case CX90D machines working in Salcey Forest, seven miles from the centre of Northampton. It’s a magnificent woodland that has many miles of ancient wood banks, building remains and ancient trees, with endless walking trails, so it takes a lot of carefully planned and executed maintenance – and it provided the perfect backdrop to see the two Case excavators performing what they do best, powered as they are by Stage V, 4-cylinder 68 HP Yanmar engines which are widely used in the market.

The excavators spent three days on site, cutting out a channel to drain standing water, work that couldn’t have been easily achieved without the deployment of a tiltrotator. “The Steelwrist tiltrotators certainly made the task so much easier and proved a perfect complement to the Case machines, thanks to their flexibility and versatility,” says Simon.

He adds: “Our operators say they are ‘over the moon’ with the machines performance. With the tiltrotators, it took a while to master the controls, but we are reaping the benefits as we can complete tasks more quickly and more efficiently. The excavators have the same cab as the Case 14 tonne models, so it feels very spacious and has all the features that provide an excellent working environment, including air conditioning, DAB radio, plenty of storage space for bits and pieces – and a huge all round glazed area that offers great visibility, further improved by the provision of a twin camera system.” 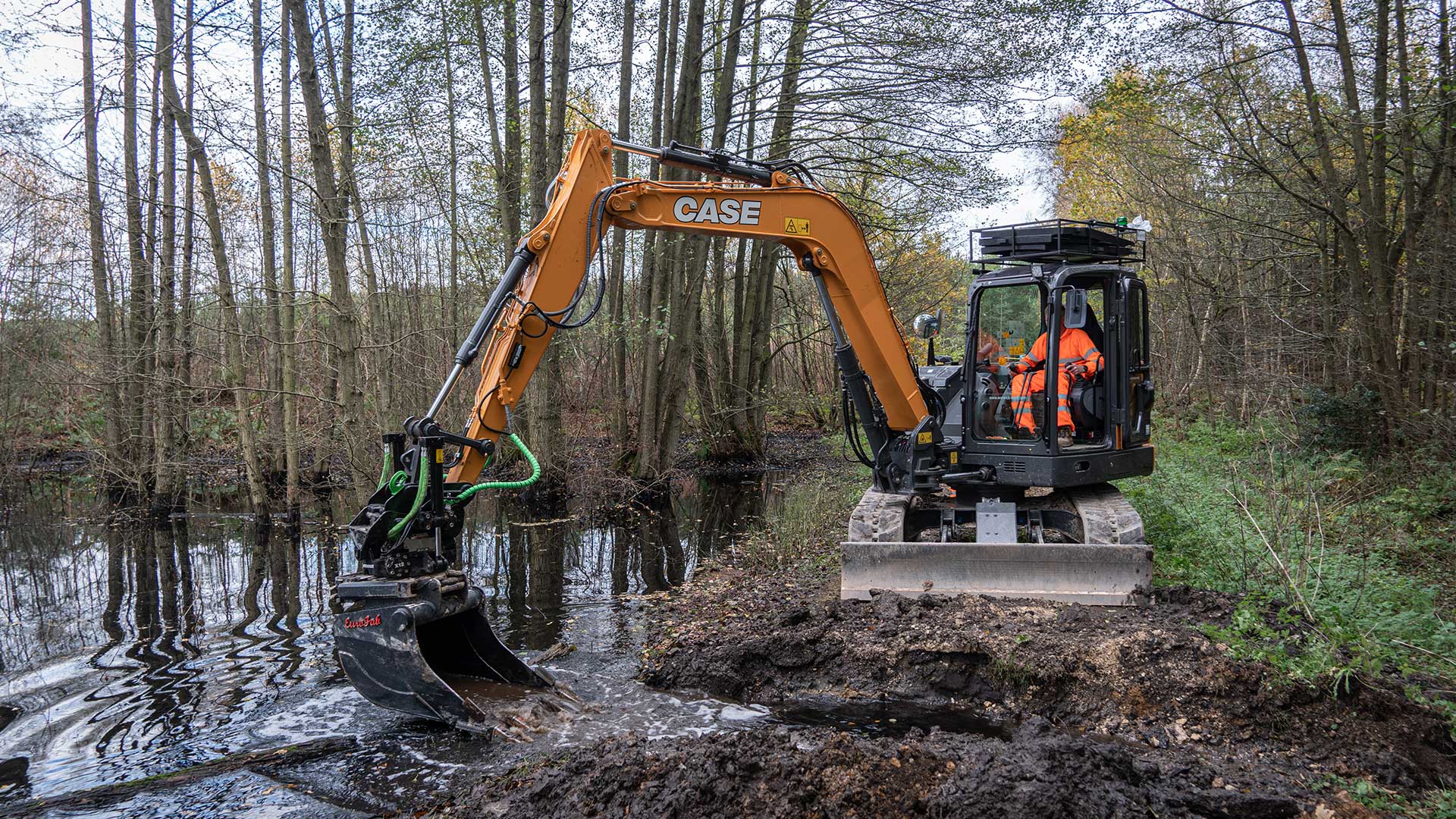